What an achievement… and still going strong!

If we were to turn back the clock to 2007 this is what we were doing.

We were watching Don Draper in Mad Men, getting geeky with the Big Bang Theory and becoming addicted to Gossip Girl.  The final Harry Potter book was released and a ripped Gerard Butler was starring in action movie 300.

You might have been playing with a Nintendo Wii, but our interactive digital world was about to be totally transformed.  Steve Jobs introduced the first iPhone and Facebook became available to the masses.

And Manorview Hotels & Leisure was born with the Commercial Hotel in Wishaw, Lanarkshire. 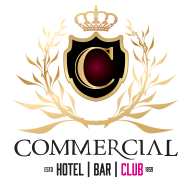 Fast forward to 2017 and the Manorview Group have a total of 16 licensed trade properties, comprising five pubs, two nightclubs and nine hotels, and a total staff of over 600.

And no-one knows the business better than Commercial Hotel General Manager Adele Montgomery. Adele has been with the Manorview Hotels & Leisure Group since the start. She was the very first employee on the Manorview books.

She also knows the Commerical Hotel inside and out, as she was employed under the previous owners, the McGuinness family, and she’s been at the venue for a total of 36 years. It’s fair to say, she’s seen everything.

In the old days there were the famous “lock-ins” which literally means you could be in the pub until around 6am.

The “lock-ins” disappeared under the new owners and Adele remembers the day Manorview took over. The old owners said to new boss Steve Graham “there’s a lassie here looking for a job”.  She met the new boss, got the job, become General Manager, and the rest is history.

Adele watched the pub undergo a huge transformation as the old pool table disappeared, and Steve Graham joined in to help with the hard graft of pulling down walls and ripping out the interior. Steve’s dad was also on hand too, and helped with all the flowers at the front of the hotel.

The Soul Suite, once the trendiest place in Lanarkshire, became the Live Lounge and it has played host to lots of lively nights throughout the years. There’s been everything from toga to beach parties and back to school nights.

Then there were the foam parties. The Commercial quickly decided they weren’t such a good idea. Especially since one was held in November, and it was freezing. And like a horror movie – the foam invaded the bar, flooded it, and just kept growing.

Then there’s the punters. Adele and her team know most of them. They’re a good-natured bunch but there’s been the old incident. And sometimes it’s the Lanarkshire women that hold more sway than the burly bouncers. Adele and her team of Sarah and Angela, have proved more effective at getting rid of rowdy people. It just goes to show – you don’t mess with the women of Lanarkshire – who’ve also been known to turn a few heads … leading to marriage proposals …

One resident from Ireland stayed at the hotel for 18 months and fell in love with one of Adele’s team. He was devastated when he had to leave Bonnie Scotland and the braw lass who worked behind the bar.

Then there’s the things people leave behind on a night out. As well as the usual mobile phones and jackets, there’s been one stiletto shoe, false teeth, a glass eye and a prosthetic arm. And one gentleman’s teeth fell out when he sneezed at the bar one day.

The hotel attracts a wide variety of ages, from the older generation, to families and the glamour of the young, and Adele remembers the girls drooling over a good-looking Calum Best.

The advent of the internet was an interesting one – as one of Adele’s first Tweets was a typo – which said “Hi Gays” instead of “Hi Guys”.  And no-one knew how to take it down. It did get a good response though.

The Commercial is where many people congregate to watch sports. It’s been named Sports Bar of the Year at the SLTN Awards.

And there’s probably no other game to provoke a lively bit of banter than an Old Firm match between Glasgow rivals Celtic and Rangers.

During one such match, after the game had finished, Adele decided to put on the music, and thought “that Tina Turner song is a good tune – I’ll play that”.  Putting on Simply The Best, after Rangers had beaten Celtic to a pub full of fans wearing green and white, wasn’t such a great idea. The other girls couldn’t get the music off quick enough while Adele was blissfully unaware. Thankfully, everyone had a good laugh and saw the funny side of Adele’s genuine mistake.

As well as winning awards, there’s been lots of success stories at The Commercial. The Hotel is renowned for their great meals, and food sales have seen a huge increase.

There’s a great team in place, with some of them being there the same length of time as Adele, such as cleaners Ella and Mary. Some people leave to go to other jobs, and then come back because they love working there.

And there’s a real sense of community. Adele remembers a bad snow storm when many people got stranded. The Hotel opened their doors and gave people food, warmth and shelter. She even dispatched CEO Steve Graham to the supermarket for more bread to ensure people didn’t go hungry.

They’ve also been long-time supporters of their local hospital, Wishaw General and the whole team continue to fundraise for the Neo-Natal Unit. So far in 2017, they have raised over £3,000.

Although Adele has been in the trade for over 30 years, she says it’s the last 10 years where she has learned the most. It was a learning curve for everyone when Manorview took over, there were new processes and structures, and then there was the fast-developing internet and the onset of social media.

What doesn’t change though is people and communities, and that’s what the Commercial Hotel does best. It’s always been a hub of the Lanarkshire community. Here’s to the next 10 years and many more…